This isn’t intended to be a comprehensive angling guide, just a few pointers for novices and beginners which will hopefully help put a few trout in the net.

Fly identification is important but not something we will consider in detail just now. However, if you’re a river angler you should consider buying “A Pocket Guide To Matching The Hatch” by Peter Lapsley and Cyril Bennett. This is an excellent little book and is available online for around £6. It explains everything in simple language which should help even the most inexperienced angler to make an informed choice of fly rather than a hopeful guess. 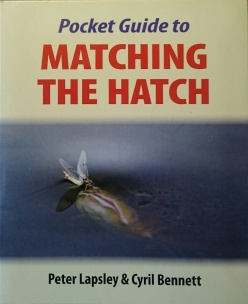 During April the best of the action will usually be from around midday till about 4pm. That’s not to say you won’t catch in the morning or after 4pm but if you only have two or three hours to fish then this is the best time.

The first flies to appear on the Tweed are March Browns and Large Dark Olives. Both are fairly large flies and a tempting meal for a hungry early season trout. The fish will rise on and off during the day depending on when the flies hatch. March Browns tend to hatch in large numbers on and off during the afternoon, so if you’re going to fish a dry fly it pays to have your dry set up ready just to grab should a rise start. It can be a good idea to take two rods at this time of year, one for wet flies or nymphs and one for dries. If you’re fishing nymphs and a rise starts it’s often over by the time you’ve changed to a dry set up. Put the nymphs or wets back on and another rise can have begun so you miss it again. Having said that, it can be worth casting a wet or nymph to a rising fish. Early season fish are hungry and often seem to be a lot less wary than later on in the season.

The main dry flies you will need for April are the March Brown in size 10 and 12, the Large Dark Olive in size 12 and 14 and the Iron Blue in size 16. The same flies and sizes are also applicable to wet flies. Good early season nymphs are the March Brown, Hares Ear, Pheasant Tail, Olive and Iron Blue. 12s and 14s for the MB and HE, 14 and 16 for the PTN and Olive and 16 for the Iron Blue. It’s well worth getting some nymphs with a small brass beads on the heads. This adds weight to the fly and enables the angler to fish a little deeper. Normally, you would only fish one dry fly at a time but with wets and nymphs you can fish two or three and you can mix nymphs and wets on the same cast. A beaded nymph on the point and a wet fly on the dropper can be a good combination.

Lots of people cast their flies downstream and let them swing across the current. While it’s possible to catch doing this, you will increase your chances greatly by casting your flies upstream and having a bit of slack in your line. This should help your flies to act in a more natural manner. You may hear people talking about the “dead drift”. The easiest way to describe this is for you to imagine what a real fly with no line attached to it would be doing. It certainly wouldn’t be speeding across the current. A bit of slack line and a short upstream cast will go a long way towards helping you achieve a dead drift. It’s much better to make short, accurate, delicate casts and keep control of you line than it is to cast to the far bank. The longer the cast, the harder it is to control the flies and get your dead drift.

Finally, keep moving! Some anglers have a tendency to stand in the same bit of river for hours, flogging the same small area of water. Wild trout will have their own little territory and once they’ve seen your flies or been spooked it’s unlikely that you’ll catch them if you don’t get any interest on the first few casts. Cast around you in a fan shape covering all the water in range then take a few steps and cast again. If you see a real biggy and it’s not showing any interest just come back to it later. Unless it’s disturbed it won’t move far and you’ll get another crack at it.

Follow these simple steps and hopefully you’ll be rewarded with some early season action!